The shock waves that Russia’s invasion of Ukraine sent across the oil markets was a stark reminder of just how reliant the world’s economy remains on fossil fuels. Now, as hopes of a swift end to the conflict fade, the spotlight is on the two Middle Eastern energy giants with the power to stave off long-term inflation: Saudi Arabia and the UAE.

With c. 4m barrels per day (b/d) possibly disappearing from the market following growing calls for widespread boycotts of Russian hydrocarbons, oil prices could surge to figures never seen in history, according to some estimates. The situation has led Washington to put pressure on Riyadh and Abu Dhabi to stabilise energy markets by jacking up production.

But while the Gulf producers continue to keep a careful watch on the developments in Ukraine, we do not expect them to step up and stabilise energy markets any time soon.

For Saudi Arabia and the UAE face a dilemma: on the one hand, saving the global economy from chronic inflation would make them the heroes who came to the rescue following a global oil supply shock; on the other, keeping the taps closed could save their domestic economies from a potential impending recession triggered by the US Federal Reserve’s planned series of interest rate hikes.

The extreme price spikes triggered by the possible loss of Russian oil and gas supply – at  the time of writing, brent crude sits at c. $107/barrel – is testament to how sensitive these assets, along with other commodities and financial assets, have become to market sentiments.

The power to bring down prices lies with Saudi Arabia and UAE. With 2.1 and 1.2m b/d, respectively, they are the Middle East OPEC producers with the largest spare capacities. If we add Kuwait (600,000 b/d) and Iraq (200,000 b/d) this number goes up to about 4m b/d of capacity that can be brought online within three to six months, according to the International Energy Agency.

As for short order capacity, which can be brought to market within a matter of weeks, this number falls to around 2.2m b/d. 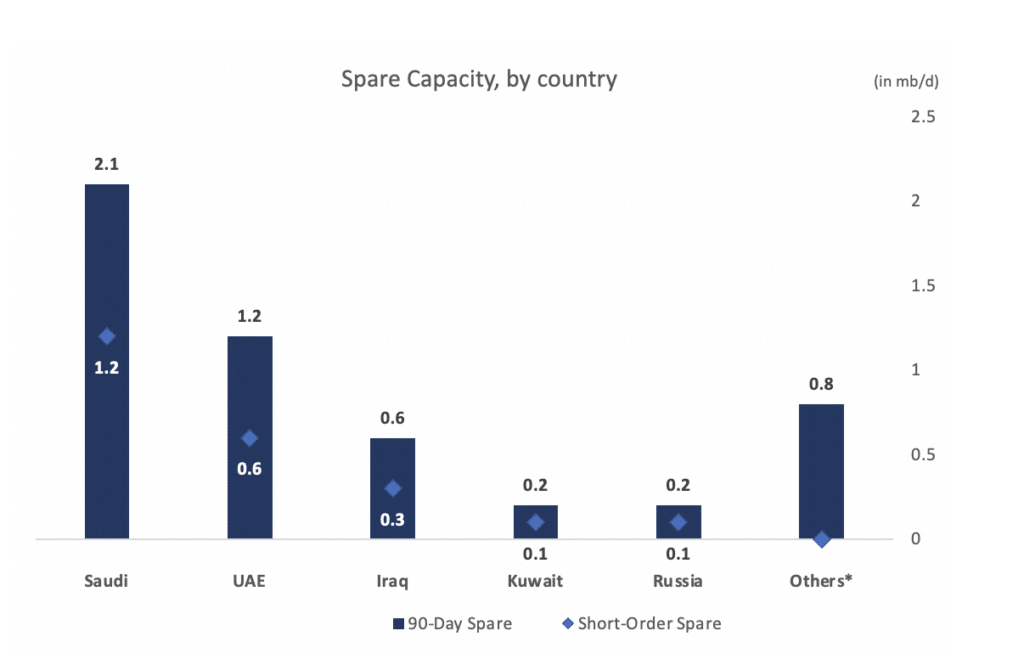 But the energy giants have so far shown no inclination to boost production despite entreaties from Washington. A big part of their calculation is that $100+ oil prices will give them the fiscal space to prevent a recession at home should the US Federal Reserve unintentionally force the GCC region into a much tighter monetary policy.

The Fed has begun a series of interest rate hikes which are expected to last until the end of 2022 and possibly into Q1 2023 in order to curb inflation, which has risen to 40-year highs in the US.

The Gulf heavyweights, alongside Qatar and Bahrain  – and possibly Kuwait – will have no choice but to tighten in line with the Fed’s rate increases in order to maintain their currency pegs to the US dollar.

How high will the Fed go?

If the inflation rate fails to drop below current levels of 7-8%, it will test the Fed’s willingness to act towards its first mandate; the reserve will need to tread a fine line between pushing the world economy into a recession and learning – and teaching the population – to live with inflation.

While the Fed is unlikely to raise rates high enough to neutralize inflation, Chairman Jerome Powell has signalled a willingness to hike by as much as 50 basis points in its next meeting in May. Six additional rate rises of 25 basis points are already expected. Since the latest Fed meeting minutes were published earlier this week, it has become clear that several members of its Federal Open Market Committee are inclined to a more aggressive tightening schedule, which could see rates rising even faster.

Additional barrels not enough to stave off inflation

President Joe Biden’s recent decision to release 180m barrels from the US Strategic Petroleum Reserve followed by an OPEC meeting which left their output target unchanged have fortified the opposing forces that are keeping prices around $100.

The extra 1m barrels per day from the US will not be enough to restore global oil supply to an equilibrium point that eliminates the risk of continued high inflation. Add to that the growing likelihood of international boycott on Russian oil, which is forecast to reduce Russian oil output to around 3m b/d, and you start to see the full picture. In 2021 OECD Europe imported 60% of Russia’s 7.8m b/d in exports to the world.

Even without a Russian-Ukrainian conflict we would have expected upward pressure on oil prices. The global demand for oil was estimated to reach pre-pandemic levels in 2022. However, OPEC+ (which includes Russia) has consistently failed to meet production targets of an extra 400,000+ b/d, aimed at bringing output back to pre-pandemic level.

Iran, Venezuela, anybody else?

The situation has left the west scrambling to find a replacement to Russian oil, which is nowhere to be found.

Iran’s claim that it can bring its production capacity up to 3.8m b/d (adding 1.4m to global supply) if sanctions are lifted remains up in the air as the nuclear deal negotiations endlessly linger on. US President Joe Biden’s decision to take Venezuela’s President Maduro off the hook is unlikely to help ease supply constraints either. The country’s potential 400,000 extra b/d are dwarfed by the numbers discussed above.

One only requires some basic arithmetic skills to conclude that Riyadh and Abu Dhabi hold the key to the present dilemma. Looking beyond arithmetic, the Middle East’s security landscape is as fluid as ever, with material developments transpiring almost daily.

We are likely to see the Gulf heavyweights use their oil as a bargaining chip to gain regional and global leverage. As the world inches towards geopolitical and economic turmoil, it pays to be a country with strong positions in both, and that is precisely what Saudi Arabia and the UAE are working towards achieving.

No hope for nuclear agreement with Iran