>Yemen’s new Presidential Leadership Council took office on April 19 in the most significant political development since the outbreak of the conflict.

>The council seeks to unify the anti-Houthi Yemeni factions in order to increase the chances of defeating the movement and to create an environment in which economic and humanitarian improvements can be implemented.

>For Saudi Arabia – which pushed it forward – the council is its best chance of reaching a political solution in Yemen and exiting gracefully from the conflict.

>While the various groups represented within the body share the goal of removing the Houthis, their differing visions for the country will hinder widescale political reform and limit its effectiveness – and relief for Gulf neighbours.

The recent spate of Iranian-supported Houthi attacks against Saudi Arabia and its neighbour the UAE coupled with an absence of satisfactory security responses from key allies – namely the US – has finally convinced the coalition of the need for a shake-up in its approach to the conflict in Yemen.

The result is the Presidential Leadership Council. Its creation has given Saudi Arabia the opportunity to cut ties with Yemen’s former President Abdrabbuh Mansur Hadi – a figure it views as increasingly irrelevant in politics – while simultaneously deescalating tensions, orchestrating (behind the scenes) a seemingly Yemeni-led political transition.

The council is tasked with taking over control of political, military and security issues across the country throughout a transitional phase that will end with general elections – to be held after a new constitution is agreed – and the inauguration of a new president. It is also instructed to negotiate a permanent ceasefire with the Houthis.

In a marked shift, its composition reflects the reality on the ground, with participants representing the military and social groups that have gained prominence during the conflict as opposed to political parties. Its representatives are intended to reflect an equal distribution of power between the north and south (see figure 1), but it also includes individuals who enjoy ties with either, or both, Saudi Arabia and the UAE – a fact that may prove problematic for its reputation domestically.

Unless it acts quickly on its key objectives, there is a real risk the council will fall apart before making any notable progress. Previous attempts at similar committees have failed and there is little to suggest that the different groupings are any more likely to set aside political differences this time around.

There is no set timeframe in which it must deliver, giving greater opportunity for disagreement to derail it. In addition, the way in which the council was implemented has raised concerns over its constitutionality and legitimacy, and how it will affect the standing of previous political agreements. Public opinion is lukewarm at present, not least because its members have been chosen outside of a democratic process. It is not yet clear that they will work on behalf of the Yemeni people and not the regional powers that gave them authority.

Unsurprisingly, the Houthis have rejected the new authority as a puppet of foreign powers and called for Saudi Arabia to refrain from meddling in domestic affairs. The movement has until now capitalised on factionalism within Yemeni politics to make military and political gains.

However, some commentators have suggested that the new political formation creates a stronger opposition than the Houthis have faced in the past, one that will force it to choose between engaging in discussions to carve out a space for itself in Yemen’s government and continuing to pursue its agenda, with Iranian support.

While the surprise UN-brokered two-month truce in Yemen appears to be holding and some humanitarian relief has been delivered,  prospects of a complete end to the fighting remain distant. Both sides have traded accusations of violations since the truce was announced, with the Yemeni Army alleging that the Houthis have launched attacks on the southern front of Marib and are mobilising forces to the west and south of the city in preparation for renewed strikes.

Saudi Arabia is hoping that the council will take responsibility for leading efforts to reach a political solution and, most importantly, curtailing the Houthis However, history shows that this is no easy task, and the Houthis have no intention of giving up on their goals.

The kingdom will continue to use bilateral talks with Iran to de-escalate tensions where possible. But it may also begin strengthening security ties with other players as relations with the US remain strained, not least due to failure to include its security concerns within JCPOA negotiations.

And with the chances of a comprehensive agreement that keeps Iranian regional ambition in check fading, this is Saudi Arabia’s next best option. 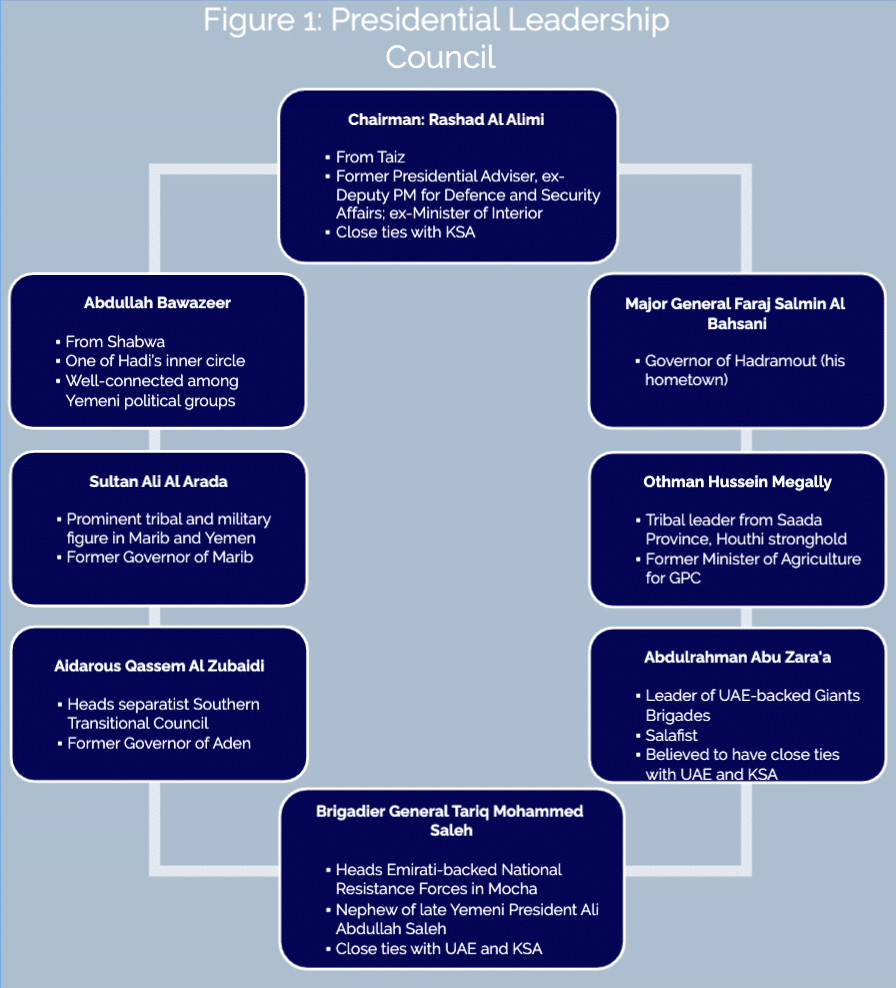